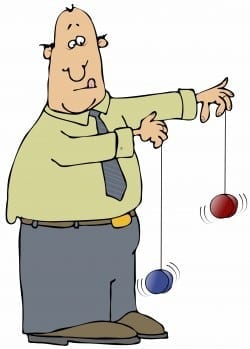 Sounds like a song, doesn’t it? Don’t worry – I’m not going to break out a guitar and give you a twelve bar blues rendition of it on You Tube. Like a yoyo, stock markets go up and down on a regular basis. And here’s the thing: It doesn’t matter.  Surprised? Well, there’s no point worrying about something you can’t change, is there? And as certain as a yoyo will go up and down, so will the stock markets. So don’t worry about it.

As long as you have a good long-term financial plan, you should be able to weather the ups and downs of markets. Too often people take short term views on stock market performance. That can be unrealistic if your long term goal – retirement, for example – is a few years off. Selling assets during a market fall can exacerbate returns.

But you probably don’t invest direct. Like many people, your investments are probably contained in pensions, bonds and ISAs.  The same principle applies, though. If you have a time-lined plan that takes into account where you are now and what you want in the future, provided that it is well constructed, it should mitigate all but the most unexpected of events.

All said and done, it depends what you want to do in the future and when you want to do it. This is why I would encourage you to think about goals rather than performance. We plot financial courses for people, just like you would plan a journey. But we start with the goal – the destination.

A business associate said to me recently that he was looking forward to working three days a week. He told me that he hoped to play more golf and have some long weekends in Europe.

When I asked him how often he wanted to play golf and how many breaks a year he and his wife were aiming for, he seemed surprised. Had he been a client of mine, he wouldn’t have been surprised as we would have been mapping out his journey for many years, based on what he wanted his destination to be.

He didn’t know when he could reduce his working week to three days either. A good financial plan has fairly accurate dates on it – so I knew he didn’t have one.

Do you know your date? Many people don’t. But it’s another benefit of having a solid financial plan in place. You’ll have things to look forward to and work towards. And hopefully you’ll be whistling “Don’t Worry, Be Happy” rather than the Yoyo Blues!

Until next time- thanks for reading.