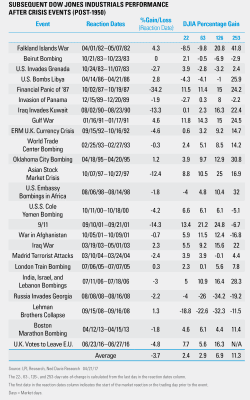 Markets are unpredictable – that’s what you’ll probably get from looking at this table.  If you cover the gain and loss column with one hand it’s hard to guess which world events affected the markets most. And that’s a big deal for most of us as many of our pensions and other investments are often partly or completely invested in the stock markets.

Some people raise an eyebrow when I talk about deposit accounts.  They are perhaps seen as the poor cousins of other investments, like equities (shares), especially when interest rates have been extremely low for so long. One of the key principles of good financial planning is to spread your investment across the asset classes, but even so, why would you place money in an account that often doesn’t keep pace with inflation?

The reason for using them alongside other investments, like shares, is that they provide security thereby offering more protection for your money in the event of, for example, a stock market or property crash.

Let’s say for example that you plan to retire at 60 and your assets have mostly been invested in the stock market. A year or two prior to retirement the stock market drops 10% meaning that (for example) £100,000 investment is now only worth £90,000. Critically though, to play catch up, that £90000 would have to grow by 11% by the time you retire in a year or so. And that could be a somewhat ambitious.

Had you placed some of your money into a deposit account, this probably wouldn’t have been the case. It may or may not have kept pace with inflation over the years and whilst it wouldn’t have set the world on fire in terms of returns, it may have provided a relative safe-haven in troubled times – particularly just prior to retirement.

So, we know that markets can be volatile in the short term, but if you look at the column on the far right – indicating the situation after 253 days, there aren’t many negatives, indicating that short term blips usually correct themselves over time.

Your investments should always be spread over the asset classes. I’m not saying that if you spot some political unrest you should switch your investments to deposit accounts to de-risk them. Far from it.  I am suggesting that from the outset your investments have some contingency planning in the form of interest-paying deposit accounts. These can help mitigate short term markets falls and also provide available cash reserves for other purposes.

What percentage of assets should go in a deposit account?

There is no prescriptive percentage of assets that should be held in interest-paying deposit accounts. However, I usually recommend clients who are in or approaching retirement place 2 to 3 years’ worth of expenditure in this type of account, but it does depend on individual circumstances. It is certainly a conversation I have with all clients who are in or approaching retirement, but it has to be assessed in the context of their overall situation.