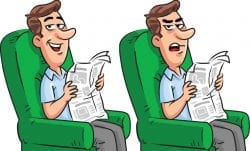 “Pope backs Trump”, “FBI Agent Suspected in Hillary Email Leaks Found Dead”, “Hillary sold weapons to ISIS”. All these fake headlines went viral on Facebook prior to the US presidential election in 2016.¹

Fake news is a hot topic since Donald Trump accused the media of it in the run up to the presidential election. Of course, it’s nothing new as a phenomenon, but thanks to Mr Trump it is in the headlines. (Unless they are false headlines, of course!)

Historians may smile and recognise that fake news is just a contemporary rebranding of propaganda. Across the centuries, people have spread incorrect or inaccurate news for their own benefit.

Octavian created a smear campaign to assist his victory over Marc Anthony in the last war of the Roman Republic. Then he changed his name to Augustus and issued a flattering and youthful image of himself throughout the Empire, insisting on its continued use, even in his old age.

And the Second World War was rife with propaganda, from the Nazi stereotyping of Jews to the British leafleting satirising the Nazis.

We tend to believe what we read in print – and more recently on social media. And it is the access that we all have to publishing tools (like blogs) and dissemination channels (social media) that have fuelled the recent growth in fake news. Whilst a couple of decades ago mainstream news and associated opinion were the property of journalists and broadcasters, now anyone with a computer and an opinion can voice the latter to a large audience, just as I am doing now.

Fake news, in my view, has found its way into the financial planning columns of our newspapers and is also sometimes evident in the broadcast media. It is less sensationalist than mainstream fake news, which is usually initiated for monetary gain (advertising revenue from clicks) or political advantage, but it is still important to recognise.

Many people still rely on what they read in the paper for financial advice and do not see an Independent Financial Advisor. So, they make big personal decisions about investment, inheritance tax planning and structuring their retirement planning – based on column inches, rather than considered advice.

Some of the information in the money columns is at best an ill-informed generalisation and at worst could lead to undesired outcomes. It is very often based on poor background knowledge of possible associated implications that the advice may have. What is often missing is “if you do X, you need to beware that Y could happen if you intend to do A, B or C in the future”.

By way of an example, I read an article last year that on the face of it was about workplace pensions (auto-enrolment). However, it ended up praising the qualities of SIPPS (Self Invested Personal Pension Schemes). The former is intended to be a simple and largely compulsory way of saving for a pension via an employer. The latter is a far more complex solution where you effectively build your own pension. Clearly, different solutions are suitable for different people. But the article didn’t make that clear and so a reader may have got the impression that SIPPS are an alternative to workplace pensions. Confusing, at best.

Financial Planning MUST be bespoke

Financial advice should always be completely bespoke – customised to the individual. Until you can build up a picture of a person’s life, family, aspirations – as well as the nature of their assets – you cannot possibly give meaningful advice.

Have you factored in all the tax implications? Do you know when you will retire? What do you want to do in the future? What’s your stop-work date? What about the kids? What about the mortgage, the business, the cash in the bank and the other bits and pieces – whichever of these you have. And then there’s planning for later life and also inheritance. Will what you do today with your money have tax implications down the line?

There are so many questions to answer. But it is only when you know what matters to someone that you can tailor bespoke financial planning to them. We carry out fairly complex financial forecasting for all of our clients as well as an in-depth analysis of their aspirations – right down to how much fun they aim to have in retirement! Only then can we possibly know how to advise them.

Put it into context

So, you’ll understand why I get on my soapbox about “fake news” in the financial press. It’s not intentionally malicious fake news, it’s just that you need to read it and bear in mind that it needs to be put in the context of your own situation to make it relevant.

Take what you read with a pinch of salt. Read – yes, inform yourself by all means, but before you act on anything, do the sensible thing and take advice from an Independent Financial Advisor – whoever that may be!

Until next time, thanks for reading…